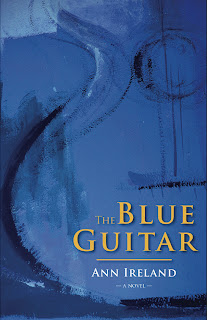 A new novel by Ann Ireland

At the International Classical Guitar Competition in Montreal, top flight musicians fly in from all over the world to compete in a grueling week. A career can be made or lost here, and the slightest mishap –a lapse of memory, a shaking right hand, a broken fingernail – can ruin years of preparation.

More than a decade ago Toby made the finals in a similar competition but suffered a breakdown and is only now venturing back into the fray. Middle-aged Lucy is tired of playing bar mitzvahs and weddings and is determined to perform the recital of her life. Trace is a kayaking teenager from the West Coast who seems careless in her talent. Judges and contestants alike battle and scheme to achieve what they most desire here. There is much more than pretty music being formed on this stage.


Reviews
‘..what Ireland does exceedingly well is mimic a creative mind under intense pressure. She has the ability to render acoustic sound in language that is beautiful and startling.’ Jessica Michalofsky, The Globe and Mail

‘Ireland immerses the reader into this foreign landscape with a verisimilitude that seems born of personal experience; in this immersion, and in her writing about the music itself – the acts of memorization, practice, playing and listening – Ireland soars, utterly transporting the reader.... The stark frankness of the last few pages of The Blue Guitar are powerful and brave, the sort of writing one sees only from a writer in full command of her powers, a flaying depiction of intimate brutality and selfishness that one might well recognize from life but rarely sees in such unadorned form in fiction... It’s not cynicism, it’s just reality, beautifully and unflinchingly depicted.’ Robert J. Wiersema, The Vancouver Sun